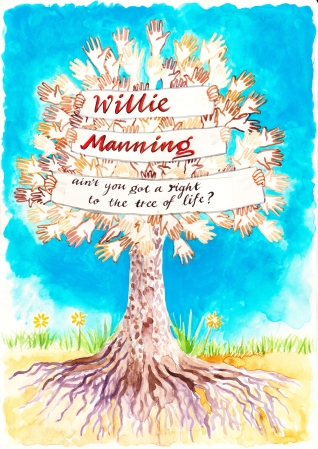 Willie Jerome Manning, on death row in Mississippi, was convicted at two separate trials of two unrelated double murders. He was exonerated of one of his convictions (Jimmerson-Jordan murders) on April 20, 2015, because the key witness recanted, saying his testimony had been coerced by the prosecutor and prepared by police; significantly, the prosecution withheld evidence that showed this witness must have been lying. If this evidence (police canvass notes) had not existed, or had not been withheld, Willie could well have faced execution on the basis of false, coerced, recanted testimony.
(See more about this case below, at
1993 JIMMERSON-JORDAN CASE [BROOKVILLE GARDEN CASE]: EXONERATED)

Willie is still fighting his other capital conviction (Stickler-Miller murders), for which he came within hours of execution on May 7, 2013. He has always maintained his innocence in this case. Forrest Allgood was the prosecutor in both Willie’s cases; Sheriff Dolph Bryan was also involved in both cases (see more here).

The rules of the US death penalty system and the “materiality” rule make it extremely difficult for an innocent death row inmate to be granted a new trial. Black Americans are “about 50% more likely to be innocent of the murder than other convicted murderers”, largely because of the greater incidence of police misconduct against black suspects. 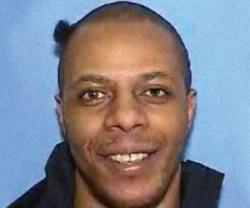 1992 STECKLER-MILLER CASE
Willie is appealing against a conviction and two death sentences for the murder of two students, Jon Steckler and Tiffany Miller. In 2013 Willie was granted his request, first made in 2001, to have DNA testing and fingerprint comparison performed on items related to this case. Preliminary DNA testing on items found at the crime scene has been completed. Further DNA testing is being conducted on the rape kit, pubic hair combings and fingernail scrapings; comparisons are being made with Willie’s DNA profile and the DNA profiles of the victims. Fingerprint evidence from the crime scene and from a car linked by the State to the murders is being matched against a database.

Events Leading to Willie’s Conviction
Jon Steckler and Tiffany Miller left Steckler’s fraternity house at Mississippi State University at approximately 1 a.m. on December 11, 1992, on their way to the trailer park where Miller lived. At about 2.15 a.m. Steckler was found on a rural road not far from Miller’s home, having been shot and run over by Miller’s car; he died soon afterwards. Miller’s body was found nearby, showing signs of rape or attempted rape; she had been shot. Miller’s car was found parked outside apartments not far away.

An unlocked car which was parked outside the fraternity house that night was reported the next morning as burglarized (see more here). Prosecutors speculated that when the two students left the house they disturbed the burglar. The prosecutors’ theory was that the burglar then forced the students into Miller’s two-seater MR2 sports car (also parked outside the house), and traveled with them before robbing and killing them. This theory was contradicted by a state witness statement that referred to two perpetrators and two victims crammed into the two-seater car. It is unclear how even one perpetrator could have controlled two victims in a two-seater car. (John Wise, the owner of the burglarized car, testified that “the only way to have three people in the MR2 was to have one on the other’s lap in the passenger seat”. See Petition for Post-Conviction Relief P.13, ¶ 36. {P. 21 of PDF}.)

Issues with this Case
Willie has many serious issues to raise, including:

It was the Steckler-Miller case that brought Willie close to execution on May 7 2013, following a 5:4 decision by the Mississippi Supreme Court that denied him his request for DNA testing of biological evidence from the murder scene and analysis of fingerprints found in the car belonging to one of the victims (Willie originally requested DNA testing in 2001 – see more here).  The 4 judges who dissented issued separate statements that included the following:
“Manning presented evidence at trial that undermined the State’s case against him.”
They also noted that DNA testing might enhance public safety by identifying unknown perpetrators.

Shortly before Willie’s scheduled execution, as part of their review of widespread flaws in FBI forensic evidence, the US Department of Justice (DOJ) sent three letters to officials in Mississippi admitting that FBI expert testimony given at Willie’s trial regarding hair and ballistics was flawed. Two of the letters were about hair testimony.

The first letter revealed the error made when the FBI hair analyst gave the jurors a general explanation of microscopic hair comparison: he wrongly ‘stated or implied’ that a hair could be ‘associated with a specific individual to the exclusion of all others’. The second letter focused on another error: in a written report the analyst stated unequivocally that some of the hair tested in Willie’s case (fragments vacuumed from the floor of Miller’s car) was ‘of Negroid origin’, and in testimony he described it as being ‘African American’. The letter tells us that this ‘exceeded the limits of science’: he should instead have testified that the hair exhibited traits associated with African Americans.

The third DOJ letter outlined the errors that were made in ballistics analysis:
“The science regarding firearms examination does not permit examiner testimony that a  specific gun fired a specific bullet to the exclusion of all other guns in the world.”

The Mississipi Supreme Court issued a Motion to Stay Execution to Willie only 4 hours before the scheduled execution time on May 7 2013. The decision was widely reported, including in The Huffington Post. The Court issued a further order on July 23 2013, unanimously reversing its earlier 5:4 decision to deny testing. No reason was given for the reversal, but presumably all judges now embraced views originally held only by the minority.

Willie asked the Mississippi Supreme Court for hearings to consider the reliability of expert testimony regarding ballistics and hair analysis, but in its ruling of July 25 2013 the Court denied him these hearings. A further request, to have his convictions set aside, was also turned down.

The Texas lab was taken over by a lab in Virginia, Bode Technology, later in 2015; the DNA testing is continuing in Virginia. On February 11, 2019, a judge set limits on the time allowed for decision making about DNA testing by attorneys involved in Willie’s case. On March 13, 2019, Willie’s counsel instructed Bode Technology about more hairs from the case to be tested; the lab anticipates this stage of the testing to be completed by June 5, 2019.

On June 5 2015 the Oktibbeha County Circuit Court ordered that the Mississippi Crime Lab should work with Ron Smith & Associates, Inc. (MS) to attempt to determine matches for the fingerprints found at the murder scene and on the burgled car. The court order states that within 30 days the fingerprint lifts should be dispatched to the Mississippi Crime Lab to start this process .

Other Issues with this Case
A crucial deadline for this case was missed in 2000 because the state court appointed first one, then another unqualified lawyer to defend Willie.* These lawyers failed to file appropriate papers and did nothing but seek to withdraw, citing their own inexperience and inappropriate qualifications.  Meanwhile, Willie found a qualified lawyer who sought to represent him, but the Circuit Court failed to act on this motion.

On July 17, 2012 the United States Court of Appeals for the Fifth Circuit blamed Willie for the confusion leading to this missed deadline. It failed to recognize Willie’s efforts to procure the attorney of his choice; and the fact that incarceration meant that effective self-representation was impossible. The United States Supreme Court declined to review the case. See more here.

*Willie Jerome Manning v. Christopher Epps. 10-70008. Supplemental Brief of Petitioner-Appellant. In the United States Court of Appeals for the Fifth Circuit, Appeal from the United States District Court for the Northern District of Mississippi. Filed August 8, 2011. Pages 14 – 29 (19 – 34 of pdf). Print

Further Information about this Case
Andrew Cohen wrote extensively about this case in The Atlantic in May 2013: you can read his analysis here, here, here and here. You can also watch a video analyzing the case at Democracy Now.

Former policeman, Vincent Hill, believes that the students’ murders indicate not robbery, but a crime of passion:
(At 12.30) ‘I think if it was a robbery it would have happened right there, and there would have been no ride into the woods, and “I’m going to shoot the boyfriend in the back of the head, execution style, and then I’m going to run him over because I hate him so much, even though I’ve just met him 10 minutes ago, and then I’m going to shoot the girl in the face”…
(At 50.10) I do believe that was a crime of passion. Unfortunately, I’ve said it, and I’ll say it again – there’s someone out there that has gotten away with this murder, because just looking at the wounds, especially to Tiffany, they were personal. They were personal, they were personal, you know. That does not happen in a robbery. It just doesn’t happen.’
(See more here.)

1993 JIMMERSON-JORDAN CASE (BROOKVILLE GARDEN CASE): EXONERATED
Events Leading to Willie’s Conviction
At approximately 8:30 p.m. on January 18, 1993, the bodies of Emmoline Jimmerson and her daughter, Alberta Jordan, were found by neighbors on the floor of their apartment in Building 10D of the Brookville Garden Apartments, Starkville, Mississippi. The women were last seen alive about 3 hours before this. Both were badly beaten with an iron found in a back bedroom of the apartment, and both had suffered slash wounds to the front of their necks.

Issues with this Case
In May 2013 Oktibbeha County Circuit Judge Lee Howard denied Willie a post-hearing memorandum in this case. Appealing this decision, Willie stated in two briefs, submitted December 2013 and May 2014, that this case involved substantial allegations of State misconduct resulting in wrongful conviction. He made the following points: